(SAN BERNARDINO, CA) — Omnitrans buses helped transport people evacuated from the scene of the deadly terrorist attack in San Bernardino on December 2, 2015.
Through the County of San Bernardino Emergency Operations Center, Omnitrans was called upon to help transport people evacuated from the Inland Regional Center and surrounding businesses after the shooting. Initially people were taken from the incident scene to a local church where they could be interviewed by local law enforcement. Later people were transported to a community center where they reunited with family and friends. Two law enforcement officers accompanied each bus. 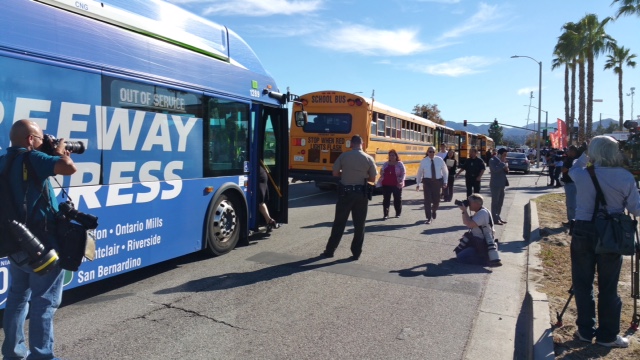 “We played a limited but important role in assisting our first responders during this tragic event,” said Omnitrans CEO P. Scott Graham. Four Omnitrans vehicles including three 40-foot and one 60-foot bus were utilized. Over 460 passengers were transported.
As part of the county emergency communication network, Omnitrans security staff was notified of the active shooter situation at the Inland Regional Center within minutes of initial 911 calls. Bus service to the immediate area was detoured, however Omnitrans worked to maintain as much regularly scheduled service as possible. “We do not shut down service and leave passengers stranded on the street,” said Graham. “We adjust, adapt and provide whatever service is possible as conditions permit until normal operations can resume.”

Omnitrans buses line up at a staging area to transport evacuees after December 2 terrorist attack in San Bernardino, California.

Coach Operators and other employees were notified of the emergency situation and security guards at the San Bernardino Transit Center and Omnitrans headquarters in San Bernardino were placed on heightened alert, but both facilities remained open to the public.
MEDIA CONTACT:
Wendy Williams
Director of Marketing & Planning
Office: 909.379.7151
Mobile: 909.213.8289
wendy.williams@omnitrans.org